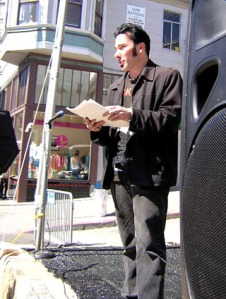 William Taylor Jr.’s last collection of poetry, Words to Songs Never Written, is a must read. I will admit that I find little that holds my interest in contemporary poetry. I discovered Taylor after I discovered A.D. Winans. Maybe it was Winans that pointed me his way, maybe it was google. Anyway, his name kept popping up in various online publications. I took a look and I liked his work. He was compared by some reviewer as picking up where Bukowski left off. I am not sure I agree with that or if that remark could be the kiss of death for any new poet or at the least–just plain foolish.

I picked up his first book, So Much is Burning on Amazon and liked it. But Words to Songs Never Written is by far the best collection, bar none, I have read lately.

When I first read his work online, I thought it as worth reading but labeled it without any grit. After all, walking the streets of San Francisco looking for material and slipping in a back alley bar for a cold one—should have some grit. When I read his collective work I changed my mind. Taylor doesn’t need the grit of Bulowski or anybody else. He has his own voice—a seemingly gentle, yet true voice centered on observing life seen on the street and neighborhood bars in his city. Taylor sees life through a poet’s eye–a little bit differently. He lets you look at the world through the eyes of someone who sits on his roof on the Fourth of July drinking wine waiting for the first hint of the sun telling the world what he thinks. Outside of writing he appears to be a good soul–someone you wouldn’t hesitate having a drink with. That persona comes through in his poetry also.

I ordered my copy from Taylor and when it came in the mail, it was late fall. I had just raked the damp leaves around my yard, had them piled up and was watching them smoke and smolder—not wanting to burn. They were a good 20 feet from my greenhouse, so I sat down on the porch and began reading. About halfway through I smelled something like plastic melting. Yeah, the pile of wet did burn and the wind blew a spark up against the greenhouse catching hold of some already dried leaves—melting the bottom two feet all the way around the structure. This filled the greenhouse with thick smoke and nearly burned down the house as it is connected.

Like I said, I am not one easily captivated by much of anything. But there was something fresh and unique in his voice. I couldn’t put it down. So hire the yard work out, get the book, bookmark his web site and stay tuned for his next release from Sunnyoutside Press. You won’t be disappointed.

And if you wait long enough, the wind will take care of the leaves.

My last talk with this poet went like this.

Scot: Who were your early influences when you began writing poetry?

William: I first really started writing poetry late in High school, and I remember being really into some of the Romantics; Byron and Shelly in particular. Soon after, I discovered Thomas Hardy and e.e. cummings, both of whom I also loved (and still do). So my earliest work was of a rather archaic, romantic nature. Rhyming and strictly structured. Sonnets and what not.

Scot: How often do you write? Do you have a routine?

William: I’m always jotting down phrases and ideas as they come to me, but I do most of my writing a few days a week when I don’t have to work. I’ll get up and work on some pieces, edit some stuff, try and put together all the scraps of ideas I’ve collected over the week and see what I can do with them. Later in the day I’ll take a walk around the city, have a drink here and there, and collect more images and ideas. it’s an ongoing process.

Scot: Many say nobody reads poetry anymore—if true why is that?

William: Poetry is generally pretty low on the average person’s list of things to read. Everybody writes it but nobody really wants to read the stuff. People either think of poetry as very academic and incomprehensible to the average reader, or just really sappy, teenage journal kind of tripe. And this reputation is at least partially well deserved. There’s a lot of bad poetry about, it’s hard to make the time to slog through it all it find something that is real and well done.

Scot: What poets do you read?

William: Two poets that I always go back to for inspiration are T.S. Eliot and Robinson Jeffers. I can just pick up their work and read a bit and be reminded why I read/write this poetry nonsense in the first place. As far as more contemporary stuff, there’s some good folks in the small/independent press: MK Chavez. Christopher Robin. Miles J. Bell. Chris Cunningham. Hosho Mccreesh. Some others.

Scot: What advice were you given as a young poet?

William: I don’t remember being given much advice as a young poet, other than “stop that nonsense and find something useful to do”.

Scot: Has living in San Francisco helped you develop as a poet?

William: I think so. It’s a great city with a lot of distinct neighborhoods and a lot of rich literary tradition. All you have to do is step outside and walk around a bit…you’ll find something to write about.

Scot: What does it mean to be a poet?

William: I believe there is a quote by T.S. Eliot, something along the lines of “I understand the desire to write poetry but I don’t understand what people mean when they tell me they want to be a poet.”
I think a poet, and an artist in general is someone who is affected by life in a way perhaps a bit more intense than other people. They feel and see things that others might not notice and have the ability to express them in a way that reveals to people ways of seeing that they might not have discovered on their own.

Scot: How did your first book deal come about?

William: I’ve done a number of chapbooks over the years with numerous small presses, but my first real book was published by sunnyoutside press. They had published my work in the past, when it was an online journal, and when they started doing books, I guess they were kind enough to think of me. It was a similar thing with the book I did with Centennial Press. I had been published in Anthills, the literary journal published by Chuck Nevsimal of Centennial Press, and we had been planning on doing a book together for some years. And when the time was right it happened. I’m currently working on a new collection with sunnyoutside.

Scot: If you were left on an island with one book of poems or a single author’s work—what/who would it be?

William: Gosh, I imagine it would have to be Jeffers. His collected works. He’s got an amazing body of work, and his vision and poetry always puts my head in a good place.

Scot: I have read the North Beach poetry scene has died. Is there a community of poets still thriving there?

William: I go by North Beach once a week or so…there’s still a few decent bars and some interesting folk to be found. There are still readings and open mics and people still hang out at Cafe Trieste and drink coffee and wear berets and call themselves poets. I’m not sure how much good poetry is actually being created. There is the sense of people still trying to hold on to the beat thing, but that era has come and gone, and it’s a bit sad to try and pretend it’s still going on and that you are part of it. And these days North Beach is way too expensive for your average poet to live in. As is San Francisco in general. You can safely say that North Beach is not the epicenter for groundbreaking poetry that it once was.

Scot: Are there any new poets out there that will change the way we look at poetry?

William: I’m not sure if I know of anyone out there right now who will exactly change the way people look at poetry…as time goes by it gets harder and harder to do something really new…I think it is enough to have an original voice and say what you have to say in your own distinct fashion. That being said, I think the work of Christopher Robin out of Santa Cruz is a largely undiscovered gem.

Scot: What is one thing about William Taylor Jr. that we don’t know but need to know?

William: I don’t know if there’s anything that needs to be known. When not writing poetry I am probably reading comic books or playing videogames.

Scot: If you had the opportunity to talk to any poet who would it be and what would you say?

William: I would like to have had the chance to share a few drinks with Anne Sexton.

This entry was posted on Monday, June 23rd, 2008 at 1:55 am and is filed under poetry. You can follow any responses to this entry through the RSS 2.0 feed. You can leave a response, or trackback from your own site.